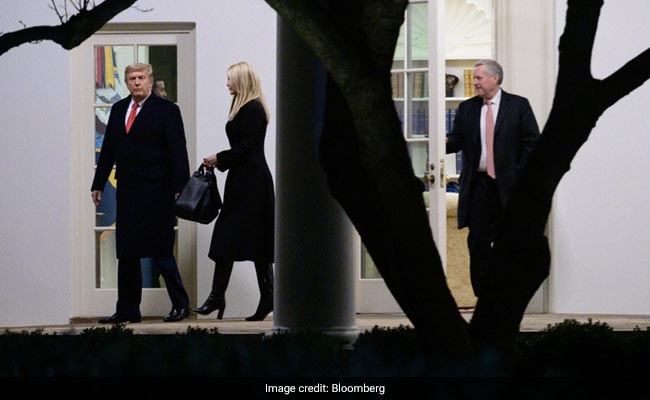 President Donald Trump has prepared a sweeping list of individuals he’s hoping to pardon in the final days of his administration that includes senior White House officials, family members, prominent rappers — and possibly himself, according to people familiar with the matter.

Trump is hoping to announce the pardons on Jan. 19 — his final full day in office — and his ideas are currently being vetted by senior advisers and the White House counsel’s office, the people said.

The biggest question facing his legal team may be whether the president has the authority to pardon himself, as he has discussed in recent weeks with top aides, according to the people familiar with his conversations. Trump has previously claimed the power, though it’s a matter of legal dispute and has never before been attempted by a president.

A self-pardon could also prove a major political liability and hamstring another presidential bid, with opponents sure to suggest the self-pardon amounted to an admission that he thought he might be prosecuted for breaking the law. 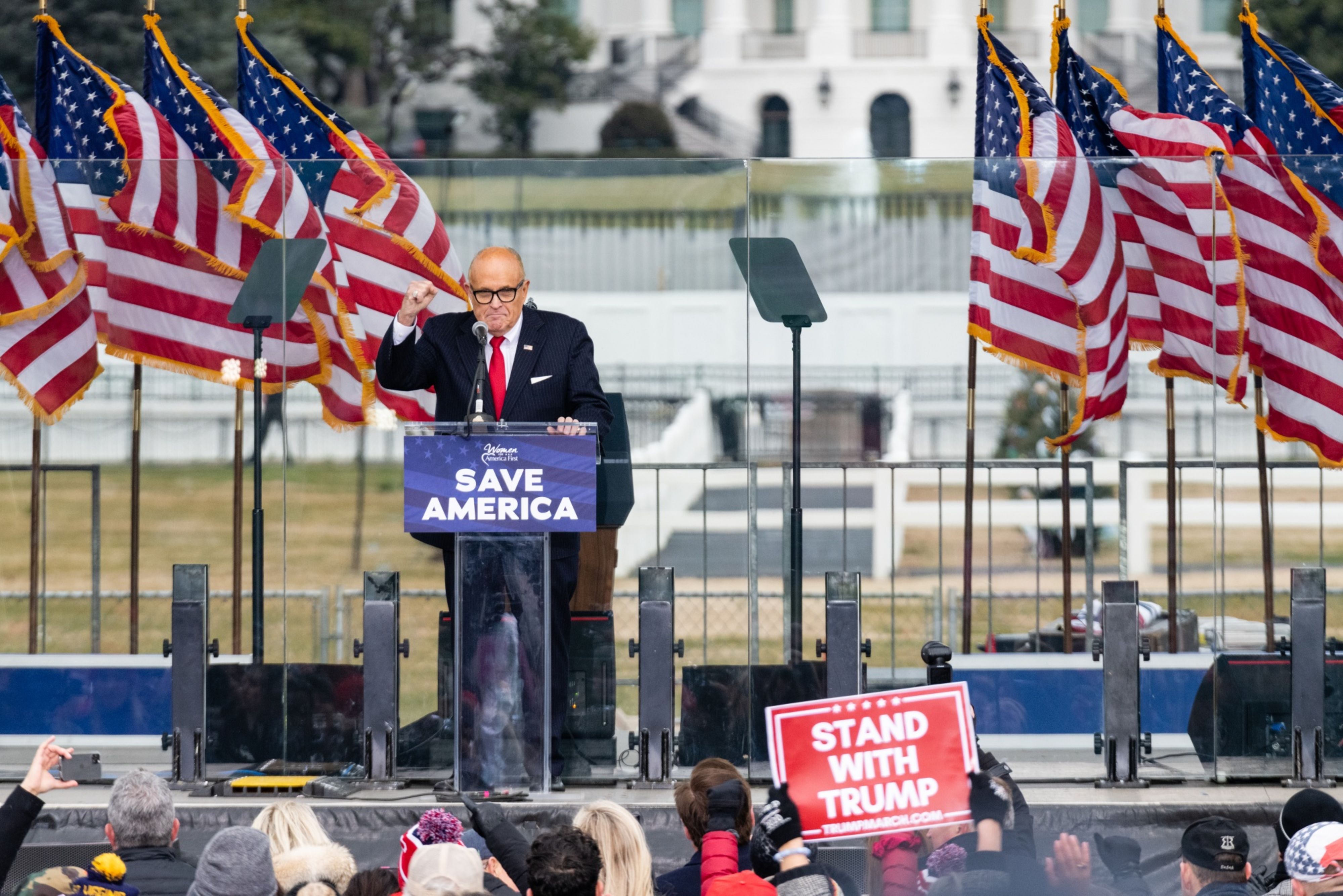 Rudy Giuliani, personal lawyer to U.S. President Donald Trump, speaks during a “Save America Rally” near the White House in Washington, D.C., U.S., on Wednesday, Jan. 6, 2021.

The president’s eldest daughter, Ivanka Trump, her husband, Jared Kushner, who both hold White House positions, are also under consideration, the people said. Trump’s personal lawyer Rudy Giuliani has also discussed the issue of a pardon with the president.

Preemptive pardons are also under consideration for other members of the president’s family, as well as friends and allies. For instance, Trump has floated a preemptive pardon for Kimberly Guilfoyle, the former Fox News host who is dating his eldest son, Donald Trump Jr.

The president wants the preemptive pardons to shield recipients from prosecutions for any federal crimes committed before the pardons were issued.

He’s also considering a traditional pardon for Albert Pirro, who previously worked with the president on real estate deals and was convicted of tax fraud. Pirro is the ex-husband of Fox News host Jeanine Pirro, a former district attorney of Westchester County in New York.

Trump is similarly considering pardoning celebrities including rapper Lil Wayne — with whom he posed for a photo during the presidential campaign –as well as rapper Kodak Black, who is serving time for falsifying paperwork to obtain a firearm.

Other prominent celebrities including rapper Lil Yachty and Baltimore Ravens quarterback Lamar Jackson have publicly lobbied Trump to pardon Kodak Black, who said in a now-deleted tweet that he would donate $1 million to charity if the president freed him. 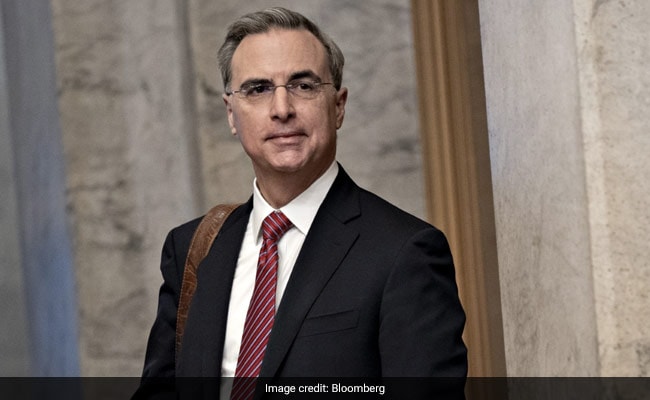 Pat Cipollone, White House counsel, arrives to the U.S. Capitol in Washington, D.C., U.S., on Tuesday, Jan. 21, 2020. President Donald Trump’s impeachment trial formally opens in the Senate on Tuesday, promising to shape his legacy, deepen the country’s political divisions and influence control of power in the nation’s capital for years to come.

Trump’s list is currently being vetted by lawyers who are concerned that pardons could create new allegations of obstruction of justice for members of the administration. The process is being managed in part by White House Counsel Pat Cipollone. A White House spokesman did not immediately respond to a request for comment.

While some of the proposed pardons have moved through the legal steps needed inside the White House, the idea of a self-pardon is far less developed, the people say, and so far only at the discussion stage.

A self-pardon could shield Trump from prosecution over a myriad of issues his political opponents have suggested could be worthy of prosecution, from his federal income tax filings to hush money payments to an adult film star to his inaugural committee’s spending at venues owned by the Trump family.

Some Democrats have continued to say Trump should face legal scrutiny over the Russian interference campaign during the 2016 election, despite Special Counsel Robert Mueller finding no evidence the president colluded with the Kremlin. And in recent days, Trump has drawn scrutiny over his effort to pressure officials in Georgia to overturn the results of the presidential election there, as well as inciting what became a violent mob that stormed the U.S. Capitol on Wednesday.

The Constitution says that a president “shall have Power to grant Reprieves and Pardons for Offences against the United States, except in Cases of Impeachment.” That sprawling authority is seen as absolute by some, though a Department of Justice legal opinion from 1974 stated that “the president cannot pardon himself,” because of what it described as a “fundamental rule that no one may be a judge in his own case.”

As has been stated by numerous legal scholars, I have the absolute right to PARDON myself, but why would I do that when I have done nothing wrong? In the meantime, the never ending Witch Hunt, led by 13 very Angry and Conflicted Democrats (& others) continues into the mid-terms!

Brian Kalt, a professor at Michigan State University College of Law who has written extensively about self-pardons, said it’s not clear whether the president can do it.

“The main argument in favor of the self-pardon power is that the Constitution does not expressly rule it out, and that the pardon power is extremely expansive,” he said.

“The argument against self-pardonability starts with the idea that granting a pardon is, by definition, something one can only do to another person,” Kalt said. “There is also a general principle in the law against being the judge in one’s own case.”

Trump would not be the first person to issue pardons preemptively, though the action is rare. Gerald Ford did so for Richard Nixon only a month after his resignation over the Watergate scandal, granting him a “full, free, and absolute pardon” for offenses he “has committed or may have committed or taken part in” during his entire term as president.

Trump’s pardoning power only extends to federal crimes, meaning he could not protect himself or his family from legal trouble on the state level. New York Attorney General Letitia James had opened a civil fraud inquiry into the president’s businesses while Manhattan District Attorney Cy Vance is pursuing a criminal investigation.

Trump has already issued pardons to several political allies and friends, including in the weeks since he lost re-election.

Among those pardoned in recent days were Trump’s 2016 campaign chairman, Paul Manafort, who’d been convicted of financial crimes and illegal lobbying, and Charles Kushner, the real estate developer and father of the president’s son-in-law. The elder Kushner was convicted of charges that included preparing false tax returns and witness retaliation.