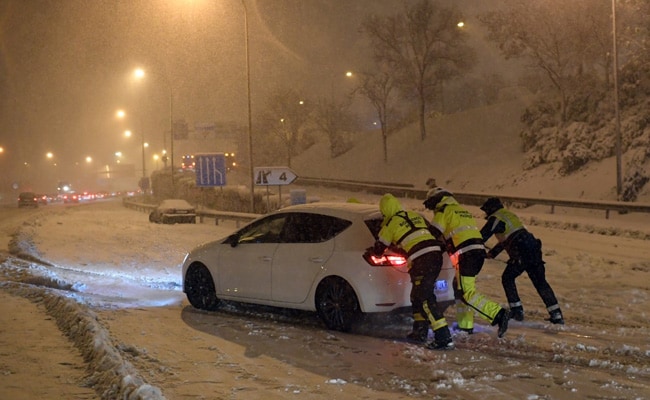 Snowstorms across much of Spain left three people dead and caused chaos across much of the country, trapping motorists and closing the capital’s air and rail links, with more falls to come Saturday.

On Friday, Madrid experienced its heaviest snowfalls since 1971 after what the AEMET weather agency described as “exceptional and most likely historic” conditions caused by Storm Filomena.

It warned that another 20 centimetres (nearly eight inches) was expected to fall Saturday in Madrid and central Spain’s lower plains, with up to 50 centimetres at higher altitudes.

“Even if, despite the extremely difficult weather conditions, the number of incidents is relatively limited, we have three deaths to mourn,” Interior Minister Fernando Grande-Marlaska told a news conference.

Apart from Madrid, the exceptional conditions put another four regions in the centre of the country on red alert Saturday: Aragon, Valencia, Castilla La Mancha and Catalonia.

On Twitter, Spanish Prime Minister Pedro Sanchez called on people to stay indoors and follow the instructions of the emergency services. He paid tribute to the work of the rescue agencies who had helped hundreds of people trapped in the show overnight.

Madrid’s Barajas airport was shut down late Friday, transport officials said the snowfall disrupted traffic on nearly 400 roads, and the Renfe rail network said all trains to and from Madrid had been cancelled.

Madrid’s emergencies agency said they had worked all night to help trapped motorists, freeing a thousand vehicles. They asked others still stuck to be patient.

Motorist Patricia Manzanares told national television how she had been stranded without food for 15 hours on the M-40 motorway in the Madrid region.

“I’ve been here since 7 o’clock last night, there are lot of us in this situation. There are 60 centimetres of snow and we are soon going to run out of petrol” and thus lose their cars’ heating, she said.

Madrid authorities have closed the parks, as well as suspending bus services and rubbish collections in the city after a night in which the snow continued to fall steadily.

Mayor of Madrid, Jose Luis Martinez-Almeida described the situation as “extremely serious” in a tweet Saturday.

“We are working to clear access to hospitals as quickly as possible,” he told the La Sexta television channel Saturday. “But frankly that is complicated, it has been snowing so much.” The army had been called in on Friday to help the authorities, he added.

In Madrid itself, the army was helping to clear roads using snow ploughs and has also helped rescue some motorists.

At least two of the city’s metro lines had their services disrupted by the conditions.

Schools and universities in and around Madrid will be closed Monday and Tuesday, said the president of the region Isabel Diaz Ayuso.

Skiers — and even a man on a sled drawn by five dogs — could not resist the wintry conditions in the capital venturing out on to the normally busy Puerta del Sol.

In all, 36 out of Spain’s 50 provinces declared snow alerts.

Catalonia in the southeast and Castilla La Mancha have both banned heavy goods vehicles from driving in the wintry conditions.

The historic city of Toledo asked the army for help clearing the streets, as did Albacete in the southeast, public television reported.

The exceptional conditions also hit sports fixtures, forcing the postponement of Atletico Madrid’s match against Bilbao, and the cancellation of the Spain-Croatia basketball match, which had been due to go ahead in Madrid on Saturday.

Before the snowfall began Thursday morning, temperatures had already plummeted to an unofficial record low of -34.1 degrees Celsius (-29.38 Fahrenheit) at a ski station in the central Pyrenees on Wednesday.

Filomena has also brought intense rain and high winds to the Canary Islands as well as Spain’s southern coast.