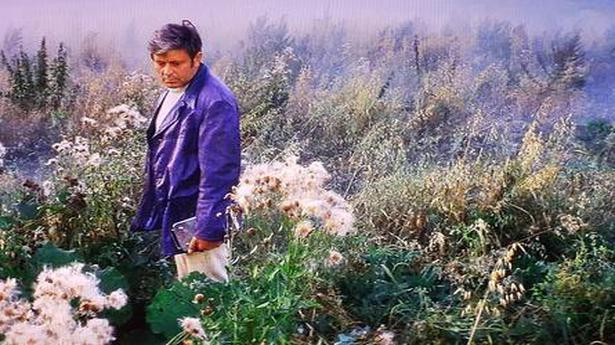 Writing about Tarkovsky, Kurosawa commented that those who explain everything about their films can’t have a bright future

In 1977, Japanese film director Akira Kurosawa wrote an article about his first visit to the Soviet Union a few years earlier. By then Kurosawa was acknowledged as one of the great masters of world cinema and his films were regarded as classics. Kurosawa describes a lunch at Mosfilms, the huge government film complex, where he meets Andrei Tarkovsky who is also beginning to be recognised as a major film director.

Tarkovsky, 22 years younger than Kurosawa, pays his respects and then excuses himself, saying he has to get back to work. A little while later the windows of the dining room are shaken by a huge explosion. The startled Kurosawa is informed that Tarkovsky is shooting a film called Solaris and a rocket-launch has just been filmed on the set. The director of Mosfilms assures Kurosawa that no world war has broken out but “this work with Tarkovsky… has proved a Great War for me.”

Coming to fame at the age of 30 with Ivan’s Childhood, Tarkovsky was very much a part of state-supported cinema and at the same time a maverick who was always at odds with Soviet ideology. The relationship may have seemed contradictory but it was actually quite symbiotic. Despite his openly professed spirituality and his sharp angularity to the state-approved forms of social realist cinema, such was Tarkovsky’s talent that Russian officialdom needed to showcase him internationally as the genius of Russian cinema; such was Tarkovsky’s cinematic vision that only a state-funded apparatus — one with large funds and no concern for profit — could mount his massive productions.

The film that preceded Solaris was Andrei Rublev, a project involving major sets and war scenes with a cast, literally, of thousands. After the shooting was almost complete, the entire processed negative of the film burnt down in a fire. A Hollywood studio would have collected the insurance and forgotten the project; at Mosfilm, Tarkovsky could shoot the whole film again, giving us one of the masterpieces of cinematic art.

In contrast, Kurosawa, despite all his great films and awards, managed to get comparable Western big-budget backing only towards the end of his career, for his battle epics Kagemusha and Ran. 20th Century Fox’s completion funding for Kagemusha came about because the project was pushed by two serious fans who were themselves hugely successful in Hollywood, Francis Ford Coppola and George Lucas.

After the Mosfilm lunch, when Kurosawa was taken to see the set of Solaris, he was greatly impressed by the detailing and the money that’s clearly been spent. There is, however, not a trace of envy in his description of the visit. “…it takes a huge talent and effort to spend such a huge cost. I closely gazed at his [Tarkovsky’s] back when he was leading me around the set in enthusiasm.”

Anyone who has seen Kurosawa’s films will remember what meaning and eloquence the man puts into his observation of characters’ backs, whether the back belongs to a Samurai or a princess, whether it is clothed in rich silks, battle-dress or completely bare. Here there is also the recognition of the expenditure of one’s very self that a massive filming project demands from an auteur. Steven Speilberg once said that he prepared for a big film by increasing his visits to the gym, and here you can see the observant Kurosawa noting Tarkovsky’s back actually ‘carrying’ the budget and the responsibility of the film.

When Kurosawa is finally shown the completed Solaris, made with a ‘handwriting’ that is completely different from his own, he is equally acute and generous. After defending the long opening sequences of nature and a futuristic Earth, he writes: “I saw this film in a preview room in Moscow for the first time, and soon I felt my heart aching in agony with a longing to return to earth as soon as possible.”

In the piece Kurosawa writes a few more lines laying out what he sees in Tarkovsky’s films while noting that the man himself stays silent, offering no explanations. Kurosawa ends the piece with a line we would do well to remember in these times of grotesque self-promotion: “There can be no bright future for those who are ready to explain everything about their own film.”

Reading this, one aches too, to return to the earth of a very different time — one where one of the most draconian states allows the flowering of a great, mystical, poetic cinema; where an older man, further along in his sadhana, notes with wonder, respect and love the growing practice of a younger seeker; where with Zen-like clarity a great artist reminds us that art, ultimately, is not about word-explanations but intense experience.

Ruchir Joshi is a filmmaker and columnist.