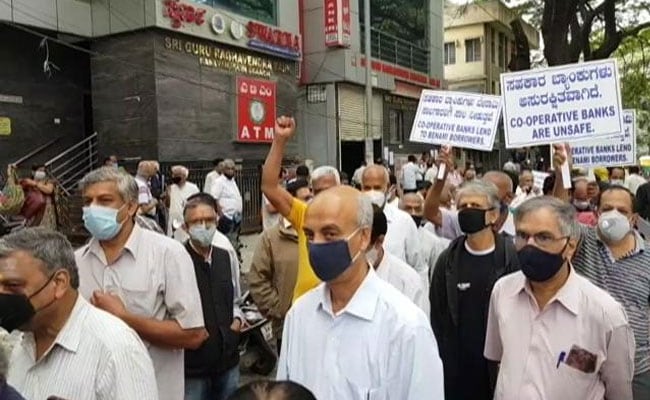 Today’s protest was held near the bank’s headquarters.

A large protest was held yet again in Bengaluru by depositors of the crisis-hit Guru Raghavendra Cooperative Bank as they urged the Reserve Bank of India to resolve their issues without delay. The bank had hit the headlines in January last year when the RBI began an investigation into the financial irregularities amounting to over Rs 1,400 crore.

The central bank had imposed a set of restrictions early January 2019 for the “next six months or until further review” at the time. The bank was not allowed to carry out any further transactions and the amount of withdrawal allowed to each depositor was limited to Rs 35,000.

After the RBI move, depositors, many of them elderly, stood in long queues to withdraw the permitted amount. The limit of withdrawal was raised to Rs 1 lakh in June last year – after which there were once again queues despite the coronavirus pandemic having started by then.

“We are all educated and we chose this bank because of the good feedback it had from RBI. We all know what happened. My father has put all his pension money there. Now they are unable to access anything. I have also kept all my money. And everything is blocked. What kind of interest is the government taking? Our foundation is shaken. What are we supposed to do? Where are we supposed to go? It has been one year. Last year, on January 10th, this sham happened. Nothing has changed since. They talk about letting us have one lakh. What is one lakh in this current situation,” Soumya Prabha, who is a depositor in the bank along with five other family members, told NDTV.

“RBI has put a moratorium on the bank for the last one year. Most of the investors are senior citizens. RBI has the authority but they don’t have the responsibility towards the depositors,” said another investor, Soumya.

Vasudev Murthy, a depositor who has invested three and a half lakhs said, “For the last one year, the depositors have silently shown their unhappiness. But nobody is bothered. I was in the government, I get a pension. But what about my friends?”