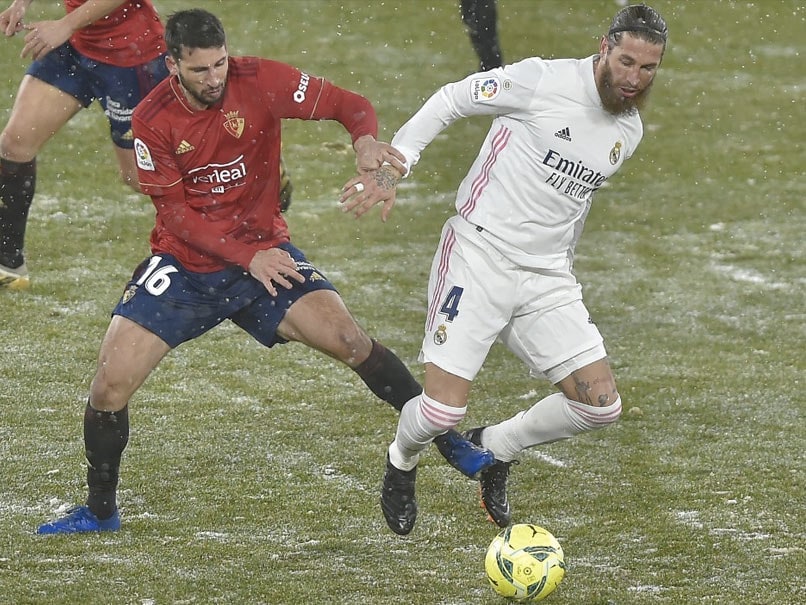 Zinedine Zidane said Real Madrid’s goalless draw with Osasuna on Saturday was “not a football match” and should have been called off after Spain was hit by a snowstorm. Madrid missed the chance to overtake Atletico Madrid at the top of La Liga and allowed Barcelona to creep closer after Lionel Messi scored twice in a 4-0 victory over Granada.

Atletico’s match at home to Athletic Bilbao earlier on Saturday was postponed due to the snow, meaning Diego Simeone’s side are top with three games in hand over their rivals.

Osasuna’s pitch in Pamplona was certainly affected by the snowfall, especially in the middle third, but large parts were green and the referee decided the game should go ahead.

“We played the game because they told us to play the game but the conditions were very difficult,” said Zidane.

“For me this was not a football match. In the end we played, and that’s it.”

Real Madrid are due to play Athletic Bilbao in Malaga on Thursday in the Spanish Super Cup semi-finals.

Messi scored twice against Granada to make it four goals in three matches for him since the turn of the year and his resurgence has coincided with an upturn for the team too, this victory Barca’s third on the bounce.

“We are calmer,” said Barca coach Ronald Koeman. “We have to stay humble, to keep working and winning.”

Messi’s double, the second a sweetly-struck free-kick, came between two strikes from Antoine Griezmann, who is also enjoying a revival after a disappointing 18 months at Camp Nou.

Some had wondered if Messi would ever get back to his best following an underwhelming start to the season but his latest contribution makes him the league’s top scorer on 11 goals, five months after he tried to leave.

“From day one, my interactions with Leo have been good,” said Koeman. “We’re used to this, if there are a couple of games where he doesn’t score, there will be a couple of people who will be unhappy, but not me, never.”

Koeman deserves credit for the rejuvenation of players like Griezmann, Ousmane Dembele and Frenkie de Jong, all of whom have improved significantly in recent matches.

Barcelona’s recovery has a long way to run, with unresolved issues on and off the pitch likely to resurface before the end of the season.

Yet Koeman will hope a corner has been turned and at a good time, with the Champions League last 16 tie against Paris Saint-Germain to come next month and a large chunk of the league calendar still remaining.

Griezmann was the instigator for the second too, the Frenchman driving forward to the edge of the area before transferring inside to Messi. Messi was given the yard he needed to shift onto his left foot and curl home.

Messi made it three from a similar position, just on the edge of the box, this time with a free-kick, which he harpooned into the corner.

Griezmann added a fourth by firing in a scooped pass from Dembele on the turn. Messi went off with almost half an hour left, his work already done, while Granada’s Jesus Vallejo was sent off late on.

Granada was spared the awful conditions that swept across much of the country, with the snowfall in Madrid on Friday the heaviest since 1971.

In Pamplona, Real Madrid struggled to break down a determined Osasuna defence.

Karim Benzema went closest after he scrambled the ball in, only to be called offside.

Atletico’s game at home to Athletic Bilbao was postponed after Bilbao’s players were unable to land and returned to Bilbao early on Friday evening.

Sevilla were able to play against Real Sociedad and won a five-goal thriller 3-2, with Youssef En-Nesyri grabbing a hat-trick at the Ramon Sanchez Pizjuan.

Defeat means Real Sociedad have won only one of their last six matches. They drop to fifth, level on points with Sevilla.