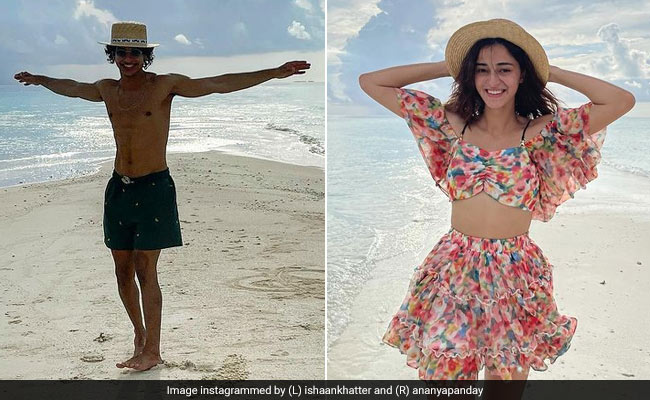 Ishaan Khatter, back from a holiday in celeb-favourite island destination the Maldives, has shared a montage of footage that perfectly encapsulates his vacation. However, it certainly isn’t the fact that he shot and edited the montage himself on his iPhone that has Ishaan’s fans bursting with excitement – it is his addendum to the caption of the post in which Ishaan credits his collaborator, actress and holiday companion Ananya Panday. “Cut a montage from my first proper ‘holiday’. Shot, graded and edited on iPhone 12pro by me (with some help muse and additional videography: Ananya Panday),” wrote Ishaan Khatter – the word ‘muse’ has, unsurprisingly, sent the Internet into meltdown.

That apart, the montage itself could serve as a tourism ad for the Maldives, were one needed – check it out here:

Ishaan Khatter and Ananya Panday, co-stars of upcoming film Khaali Peeli, registered on the Internet’s ever-sensitive romance radar when they were spotted together at Mumbai airport a week or so ago. Turns out, they were headed to the Maldives, the latest in an endless list of celebrities to have flocked to the archipelago this year post-lockdown. Both actors shared a series of posts from the Maldives on their respective social media accounts – mostly solo pictures.

And a couple shared by Ananya Panday:

Ishaan Khatter, fresh from the rave reviews he received for his performance as Maan Kapoor in Mira Nair’s adaptation of A Suitable Boy, will next be seen in Phone Bhoot. His credits include Beyond The Clouds and Dhadak.

Ananya Panday made her debut in Student Of The Year 2 and also starred in Pati Patni Aur Woh. She is currently filming two untitled projects.