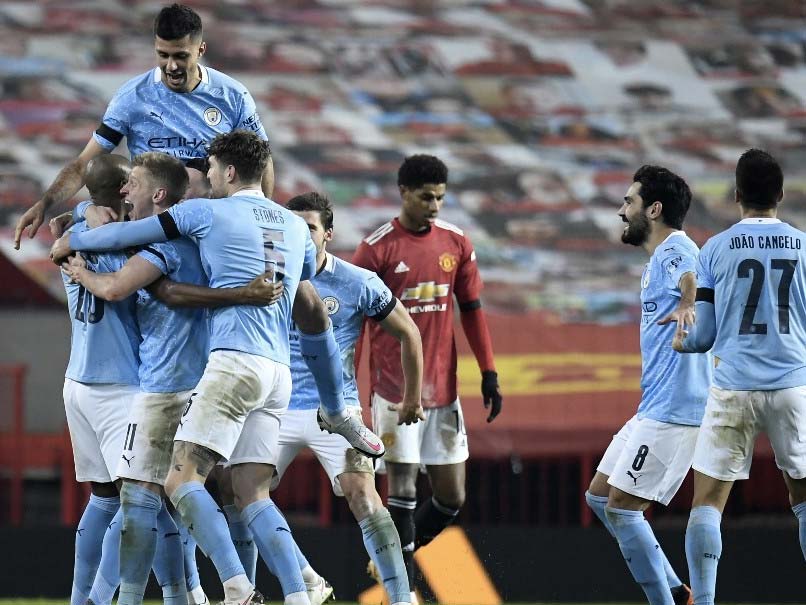 Pep Guardiola dedicated Manchester City’s 2-0 win over Manchester United to reach a fourth consecutive League Cup final on Wednesday to the family of Colin Bell, a day after the City great died aged 74. John Stones and Fernandinho were the unlikely goalscorers for Guardiola’s men, who will face Jose Mourinho’s Tottenham in the final at Wembley on April 25. Bell scored 152 goals in 492 appearances for City during a 13-year career in which he won five major trophies. City players warmed up in number eight shirts in honour of Bell’s old number.

A minute’s silence was held before kick-off with Bell’s former teammate Mike Summerbee reduced to tears as he watched on from the stands.

“That’s for him and his family. This person helps to build something for this club,” said Guardiola.

“It is an incredible victory for us to beat United away and reach another final and, especially today, it is for him.”

City now have the chance to equal Liverpool’s record between 1981 and 1984 of winning four successive League Cups.

“I know the Carabao (League) Cup is not the Champions League but four times a row is incredible,” added Guardiola. “I’m so impressed with the quality of this team.”

Mourinho was United boss the last time they lifted a trophy in 2017 and the Red Devils’ wait for silverware under Ole Gunnar Solskjaer goes on as they lost a fourth semi-final in the past two seasons.

“It’s not psychological, sometimes you meet good teams in the semis,” said Solskjaer, whose side also lost to City at this stage of the competition last season.

“We met the best team in England and for me we didn’t have enough today.

“But we’re getting closer. This is a much better Manchester United compared to a year ago in those semis, that’s positive but not enough.”

Both sides have hauled themselves back into contention for the Premier League title in recent weeks, but neither manager took the opportunity to rest key players as both made just two changes from the weekend.

Any fears of a repeat of the goalless draw between the sides last month in the league were quickly dispelled as both had goals ruled out inside the first five minutes.

Stones breathed a sigh of relief when his own goal was chalked off for offside by Marcus Rashford in the build-up before Ilkay Gundogan was also denied by the offside flag.

Zack Steffen was deputising for first-choice goalkeeper Ederson, who was one of City’s absentees due to a coronavirus outbreak, and the American produced an incredible save to deny Bruno Fernandes his 16th goal of the season with a curling effort that was destined for the top corner.

City looked more like their old selves in a thrilling first-half performance to blow away Chelsea on Sunday and they were inches away from the opener thanks to a stunning move that started deep inside their own half and ended with Kevin De Bruyne smashing against the post from the edge of the area.

The deadlock was finally broken five minutes into the second half when Stones cushioned in Foden’s free-kick with his thigh for his first goal in three years.

The England international’s poor form saw him fall down the pecking order in recent seasons, but City have now kept nine clean sheets in the 11 games Stones has started this season as he has formed a formidable partnership with Ruben Dias.

City’s issues this season have been at the other end and they again failed to make the most of their chances in the second half.

However, Henderson could only watch as Fernandinho volleyed into the bottom corner after United failed to clear a corner for his first goal in two years, seven minutes from time.