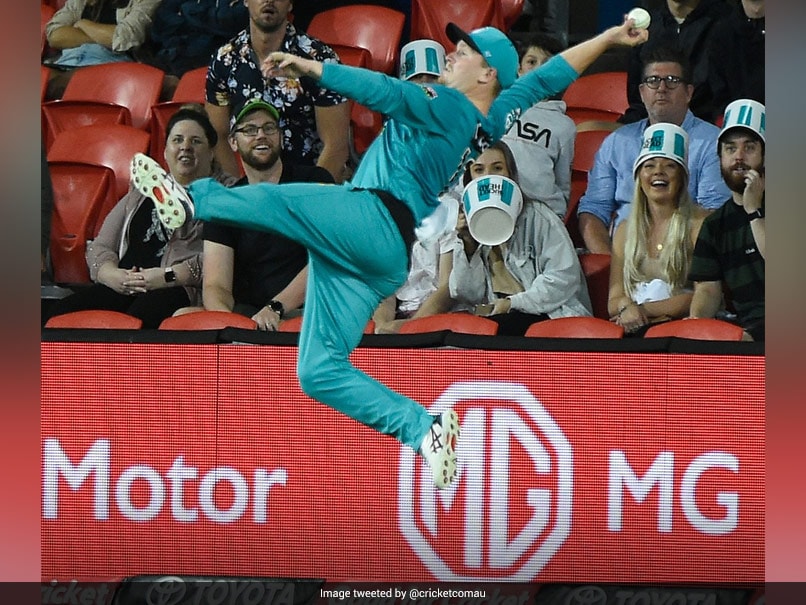 Max Bryant backtracked, jumped and palmed the ball back into play while falling over the ropes.© Twitter


Brisbane Heat cricketer Max Bryant gave the world an indication of his fielding prowess during the 32nd match of the ongoing season of the Big Bash League (BBL) against Melbourne Stars. The latter needed 42 runs off 11 deliveries in the second innings of the clash, after being handed a revised DLS target of 129 runs in 10 overs, when the Australian youngster took initiative and made his presence felt. Bryant backtracked, jumped and palmed the ball back into play while falling over the ropes at deep midwicket, despite a strong shot from Nick Larkin in the 9th over. The 21-year-old’s effort turned a six into a pair, drawing plaudits from BBL’s official Twitter account, which termed the save as “unbelievable”.

This could be the best fielding game we’ve ever seen!! #BBL10 pic.twitter.com/QoSBB1blxE

“UNBELIEVABLE from Max Bryant! This could be the best fielding game we’ve ever seen!! #BBL10,” read the caption on the video of the moment posted by the tournament’s Twitter handle.

Bryant helped save four runs for his side, which conceded 23 runs off the same over bowled by Lewis Gregory. Larkin smashed three boundaries and a six in an expensive over which could have leaked more runs if not for the save.

Brisbane Heat eventually won the game by 18 runs on the basis of DLS method. The Stars had won the toss and opted to field, with the Brisbane-based outfit smashing 115 runs for the loss of three wickets in 10 overs. Skipper Chris Lynn was the top run-scorer, accumulating 48 runs off 23 deliveries with three boundaries and four sixes to his credit.

Heat were restricted to 110/5 at the end of 10 overs, with Larkin remaining unbeaten on 35 runs off 16 deliveries.