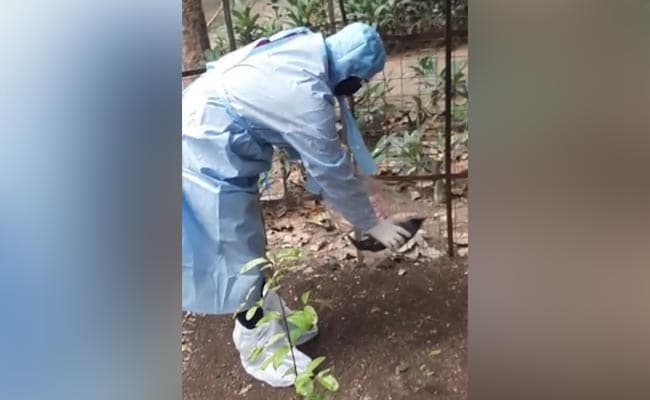 An official collecting a dead crow from a park in Delhi’s Mayur Vihar area.

A team of government veterinarians today began a probe into the unexplained deaths of several crows in a park in Delhi Mayur Vihar locality. The investigation comes at a time when some states like Haryana and Kerala have reported avian flu and culled hundreds of chicken and ducks to control the disease’s spread.

Over the past 3-4 days, around 100 crows have died, including one today, according to Tinku Chowdhary, the caretaker of the Central Park at Mayur Vihar, Phase 3. A video showing dozens of crows dying in the park had gone viral a few days ago.

Two team of doctors from the Delhi government today visited the park to investigate the problem, according to Mr Chowdhary. A third such team will now carry some specimen of the dead cows to a laboratory to test them for the cause of their death.

One of the doctors who visited the spot said there are two possible reasons for such deaths: excessive cold or bird flu.

The doctor, however, added that bird flue mostly breaks out in wet areas. The real reason for these deaths, hence, will be confirmed only after examination.

Across India, lakhs of birds have been found dead in the last 10 days. At least five states – Haryana, Himachal Pradesh, Madhya Pradesh, Kerala and Rajasthan – have confirmed bird flu, sounding an alert as the authorities step up efforts to contain the spread.

The Kerala government has declared it a state-specific disaster and issued a high alert. To contain its spread, Tamil Nadu and Karnataka have blocked any entry of poultry from Kerala.

Bird flu or avian flu viruses can infect domestic poultry and other bird and animal species. The disease is “zoonotic” but infection in humans has not been reported in India, according to the government. A control room has already been set up in Delhi to monitor the situation.