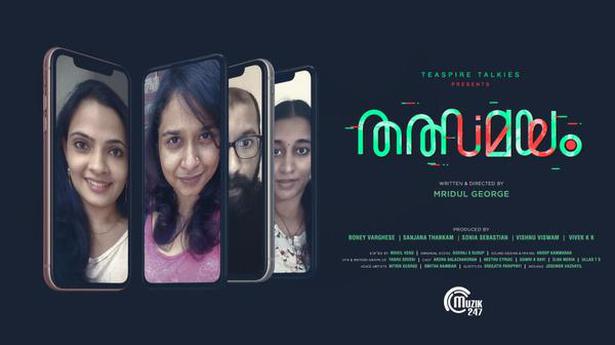 Talsamayam (meaning: live) would make many of us re-examine our attitude towards cyberbullying, what we tell ourselves, and our advice to victims — stock responses like ‘Ignore it’, ‘You will get used to it,’ ‘Don’t let it get to you’. “[Cyberbullying] gets to everybody. When it happens to actors, we indulgently call it ‘trolling’ for some laughs. But a lot of unkind things are said. It can get merciless,” says Mridul George, the director of Talsamayam, which was uploaded to YouTube on December 29.

The 16-minute short is about what transpires when a popular Malayalam actor goes live on Facebook for an interaction with fans during lockdown. The resultant bullying she faces and how she responds to it forms the climax. “Some people felt it wasn’t enough. That the ‘punishment’ should have been shown as being more stringent,” says Mridul.

Interestingly the solution to the bullying is suggested by a man, a friend of the actor. “Men get bad press because usually cyberbullies are men. That is a generalisation,” Mridul says, adding, “Over the last few days more than 14,000 people have seen the film. If it causes at least two people to rethink their actions it is worth it.”

A software engineer by profession, Mridul, who co-wrote the script of the hit Malayalam film Luca, says he had been toying with the idea of making the short film. That was when Mahesh Narayanan’s C U Soon released. “That gave us the idea: since the action takes place in the social media space then why not tell it like that,” he says.

Filming was done remotely over weekends with the actors — most of them his colleagues and friends — sending in footage. Neethu B Cyriac, the lead actor, Ullas TS and wife Elna Merin (the cyber bully and family) are all software engineers — the first two are Mridul’s colleagues. The other actor is Ardra Balachandran. Most of the technical crew were part of Luca, like editor Nikhil Venu and music director Sooraj Kurup. The only time the team ‘worked’ together was when Mridul and the editor, Nikhil, met at the editing studio. The film is produced by Teaspire Talkies and released by Muzik 24/7.

Mridul says he misses being part of a buzzing film crew. He had also been wanting to make a film during lockdown but didn’t want to leap into any project. “I didn’t want to do something for the sake of it. It had to be socially relevant,” he says. The seed for Talsamayam was planted by something he heard from a social media manager who handles accounts of actors.

“Perhaps it lingered. She said some of the things that actors are threatened with are rape and abuse. It was beyond shocking. Forget actors, some of the comments section of social media pages of regular folk, especially women, is shocking. Bullies think they can do anything hiding behind the anonymity of a fake profile. But they need to realise that there is no such thing as anonymity… technology can track you,” he adds.