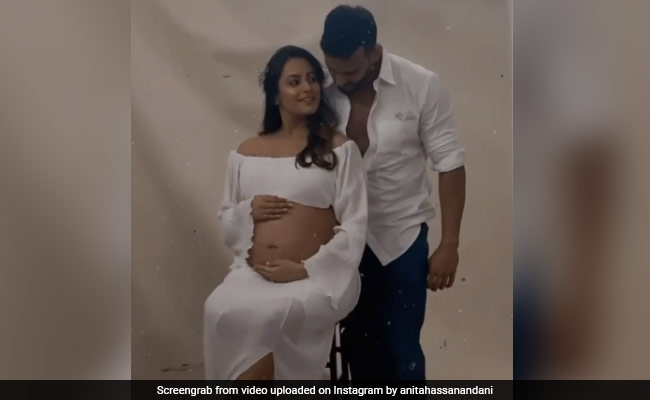 Anita Hassanandani, who is expecting her first child with her husband Rohit Reddy, shared a BTS video from her maternity photoshoot. The TV star looks stunning in the video, dressed in a white outfit and with a floral tiara on her head. Her outfit for the shoot was designed by the brand Dramebaaz. She can be seen happily posing along with her husband Rohit Reddy, who can be seen dressed in white casuals. Anita Hassanandani’s pregnancy glow is hard to miss in the video. Posting the BTS video on her Instagram profile, the TV star wrote: “Shooting with Bae and to be BaeBee.”

Check out the video here:

Anita Hassanandani married Rohit Reddy in the year 2013. She is best known for starring in popular TV shows such as Ye Hai Mohabbatein, Kabhii Sautan Kabhii Sahelii and Kkavyanjali, to name a few. She has also starred in movies like Kucch To Hai and Krishna Cottage. Anita was last seen in a brief appearance in the TV show Naagin 4. She played the role of Vishakha Khanna.

Other than TV shows, the actress has also worked in several Telugu, Kannada and Hindi films such as Sreeram, Veera Kannadiga, Aadanthe Ado Type, Yeh Dil and Hero, to name a few.